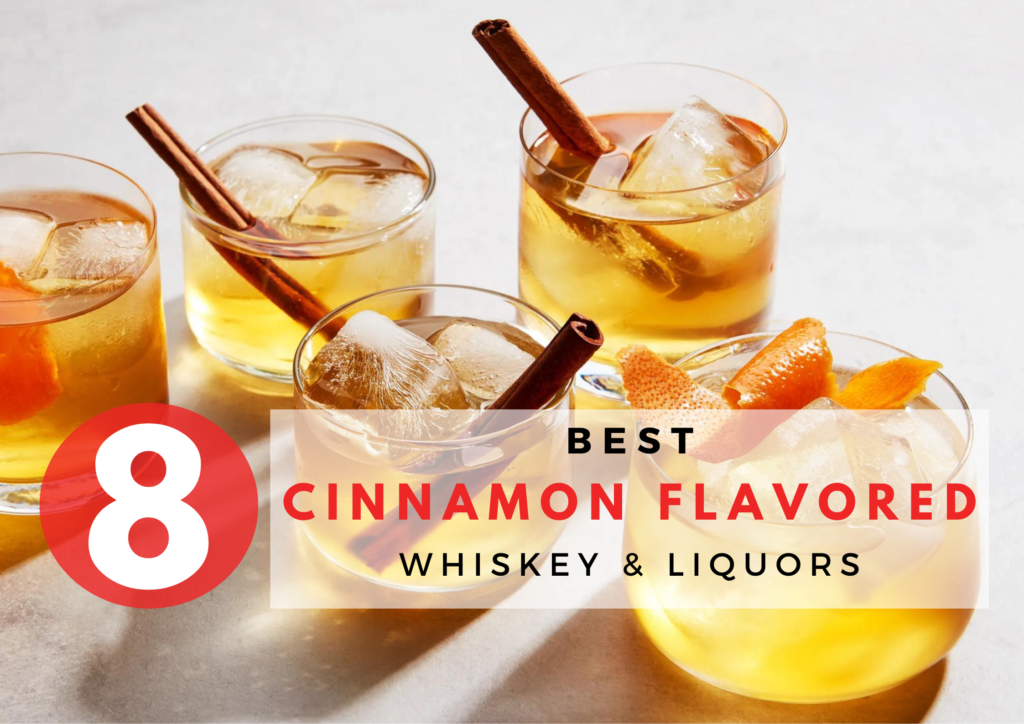 Spirits & Alcohol are a must to lighten and heat things. When stressed, it works to relax your heavy mind, and when in for romance, it works like healing magic.

There are various types that flourish in the drinking market, ranging from basic to flavored. Currently, flavored alcohols are creating a storm and seem to be high in demand. Flavors can be bubble gum, lemon, apple, and many more.

Cinnamon-flavored drinks are one of the most in the demand, there are chemical & natural versions of it over the world.

Here in this blog, I am giving a list of my best drinks that are blended with this flavor. Trying something unexpected and new comes with its cons. You can get an idea here and avoid such unfavorable circumstances.

Bowmore No.1 Single Malt Scotch Whiskey is a type of flavored whiskey which is popular because of its hot & spicy taste. Cinnamon is a flavor great to use in cocktails like cinnamon whiskey sour, Fireball, & Cinnamon Old Fashioned.

It ages pretty well with an enhanced hot spicy taste when stored in a mini oak barrel. If you are an old soul, who likes the pinch of spice poured into their glass of whiskey while reminiscing the sad and bad times, to have that feel. Then, trust me nothing is better than this liquor.

Fireball is a type of Canadian Liquor that comes after a beautiful blend of smooth Canadian whisky and spice, sweet, natural cinnamon flavors.

The best way to consume this whiskey is after taking it out straight from the freezer and drinking it as a shot. It can also be enjoyed after mixing with a drink or on the rocks. The alcohol percentage in this is about 33%.

You can have a shot of this on Christmas, Weddings, Birthdays, Parties, and many such occasions. The interesting fact about this is, it was created by a Canadian mixologist turned scientist.

It is known for its rich and unique taste with an alcohol percentage of 57 percent, which is quite strong. People prefer drinking it either neat or also opt for cocktails, which is again a great choice.

Another best part is that it is made in traditional pot stills. There are a lot of flavors apart from cinnamon that catches the taste of buyers. Cinnamon, cloves, toffee, pepper spice, and caramel are some of those.

Moreover, this is a dark and rich rum that is smooth. Woods Old Navy Rum has also won an International wine & spirits competition.

When you open a bottle of Ole smoky Cinnamon Moonshine it makes the atmosphere cozy immediately with the smell of cinnamon. When you take a sip of it, the spiciness and delicate pungency can be tasted on the tip of your tongue evidently.

The bottle is filled with a six-fold burnt moonshine. This drink is created as per a hundred-year-old tradition, where the cinnamon’s heavenly taste complements the taste of centuries, making this a unique liquor that every alcohol enthusiast must try.

The alcohol content in this one is about forty percent by volume. Its taste is amazing if you are someone who is looking for a strong & real cinnamon taste.

Foursquare Spiced Rum is a liquor without additional sweetener & just has a spicy yet dry flavor. Moreover, there is an instant fragrance of vanilla, cinnamon, cloves, star anise, and some orange flavor.

The drink brings you all the different flavors with a slight kick to it. Moreover, a such spiced drink is amazing for mixing. You can also try drinking it with fruity tonic water or else a ginger ale. Also, it tastes and smells like Christmas.

Barti spiced rum is the one that brims with vibrant flavors and everything compliments together. Where, seaweed is delicately infused which makes the rum smooth, and also has creamy vanilla, with a pinching kick of cinnamon, clove, and sweet citrus finish.

The rum is named after a forward-thinking, famous Welsh pirate from Barti. The best part about this drink is, it is amazingly smooth for a sip and has a punch good enough to be in a mixer.

If you are in for a strong cinnamon taste, that is on the sweet side, then Goldschlager is for you. There are different ways to enjoy this, but personally, I like it with ginger beer, apple juice, or just some ice cubes.

Moreover, having a similar feeling to a fireball, this could be an alternative option. It is an Italian schnapps flavored with cinnamon that has tiny 24-carat gold flakes suspended inside.

The drink has a base of fruits like a plum in it, but that’s not strong enough to be noticed like cinnamon. It has a syrup-like consistency with sweetness in every sip and spicy flavors of cinnamon lingering in the vapors. Till you finish the bottle, the hot bite lasts.

A complex drink lover? Well, then this bottle of Tennessee Fire can be the one to be added next to your favorites. This is a smooth drink with a smooth and warm finish of cinnamon.

Some professionals describe this as a cinnamon roll dipped in a glass of Jack. It is prepared with the work of Tennessee whiskey and then a spiced liquor added onto it with cinnamon and clove flavors infusion.

Just pour some of this whisky into a glass of ginger beer and then garnish it with an orange wedge. The spicy notes have cinnamon flavors from natural sources like ground cinnamon and cinnamon bark. Moreover, this whisky is not on the bitter side but instead has a sweet taste.

How to Clean Your Suede Shoes at Home